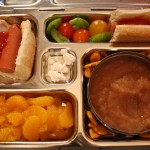 So it’s HOT DOG FRIDAY again. Truly not on purpose though. Hebrew National is the brand of course on a bun with some ketchup. We’ve got some mandarin oranges to help cancel out the madness that is – hot dog Friday (seriously it isn’t a thing). Dino Vitamins, Cheddar cheese goldfish crackers, heirloom tomatoes from […] 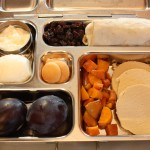 You can always tell an El Diablo baby burrito from a homemade burrito (at least in my lunch box), this one is full of black beans, rice, guacamole, and cheddar cheese. We’ve also got some Quorn Roast pieces, some cooked carrots (from our garden of course), some delicious plums, a hard-boiled homegrown hen egg, some […] 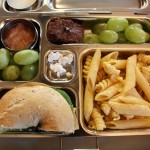 And today I’ll showcase both lunches. They are pretty much exactly the same. Both boys will consume a 1/2 Applegate Turkey, Cheese and Lettuce Bagelwich and some other goodies! Both little munchkins have some juicy organic green grapes, some homemade macaroni and cheese, and a homemade brownie (melting that chocolate is the best!), some Dino […] 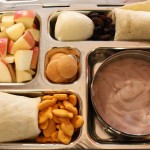 Today we’ve got a bean and cheese burrito that is cut in half…only because I’ve misplaced one of the small sauce cup lids…or I haven’t…but a little 6 year old has. This burrito is on that locally made flour tortilla that I’ve mentioned previously. We’ve got some goldfish crackers, some blueberry soy yogurt, diced organic […] 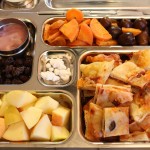 We’ve got some of our favorite leftovers today – we, almost weekly, order some Le Petit pizza dough from Farm to Family and whip up our own concoctions on the most delicious crust around. It usually is Lifeline Montzarella and some sauce (today homemade sauce from our backyard tomatoes) and some black olives. The boys […] 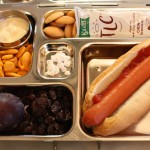 It’s hot dog Friday – well that’s not a real thing – but maybe it will be. Of course it won’t be every Friday, even though we eat Hebrew National Hot Dogs, they still aren’t healthy enough to make the lunch cut weekly. The hot dog has ketchup on half. Simon has finally given up […] 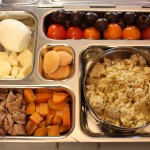 Aw yeah! This one I want to eat, right now! We’ve got a bit of pot roast from our Montana grown beef share, some carrots roasted with that delicious beef straight out of the Hickey Garden Plot in our backyard, some couscous (always a delight) and an egg that looks a bit better than yesterday’s […] 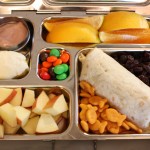 So we started ordering tortillas from our favorite grocery store – Farm to Family – and they are delicious! We’ve got one of those tortillas (flour) here filled with black beans and cheese! Mmm! Sides are a messed up homegrown hard-boiled chicken egg (sometimes if the egg is too fresh the peeling doesn’t work out […]

TIE Fighter Peanut Butter and Jelly and what more do you need? 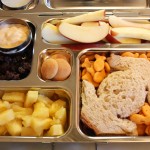 Well even though you might not think you need more – you might not be quite balanced out with just a TIE fighter for lunch. This one in particular is filled with organic peanut butter and some organic strawberry jelly. The surrounding fish crackers are of course a favorite addition to any lunch presented to […] 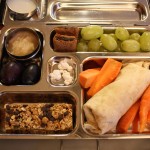 We’ve got a Kashi bar to fill a slot today, it was a tough morning gathering goodies to pack today, so I wanted something to fill that slot that I didn’t have to think about (chocolate chips included). I know my kids are so tired of carrots from our garden too, but of course we’ve […]